A serial killer is on the loose in New Mexico. The victims are from all different races, ages and sexes. The only thing in common is that they are left skinned. Further investigation show they were scoured like with a sandblaster. The weirdness of the case gets a request for Mulder since its perfect as an X-file. Soon Mulder and Scully uncover a bizarre religious ritual of the Konochine Indians The Sangre Viento or Blood Wind.

The second of Charles Grant’s book is actually an improvement from Goblins. I thought that the characterization of Mulder and Scully was more consistent with their TV characters. The story was also somewhat interesting and I was much more engaged in the plot. Still it was a Ho-Hum story. You do want something more in a novelization than just an average TV episode. The author was just not right for this series.

A series of murders are taking place at Fort Dix New Jersey. Eyewitnesses report that the murderer came out of thin air to cut the victims throat. A sports reporter whose victim was a boyfriend of his niece convinces a senator from New Jersey to get Fox Mulder on the case. Mulder with his partner Dana Scully investigate the X-files, those cases were unexplained phenomenon is involved. Mulder and Scully soon uncover a military experiment to create a human chameleon as a deadly assassin. An assassin that has gone rogue.

I decided to dust off the old X-files books in honor of the series coming back to television. I always enjoyed this series with its spooky atmosphere, government conspiracies, monsters, alien and other weird paranormal phenomenon. I think the revival has done an excellent job of re-invigorating the series which I will admit was going downhill at the end.

The book Goblins is an ok read. Sort of a middle of the road TV episode. Charles Grant was probably not the right choice for writing for this series. I just wasn’t really engaged with the story. Not a real great start for the first book in this series.

In the third year of the last decade of the twentieth century which is a fancy way for the author to say 1993, civilization came to an end. For reasons lost to time the world powers launched an all out attack devastating the world with nuclear, chemical and biological attacks. This event became known as BLAM. Now after the BLAM those most used to the absence of civilization were in the best position to survive and the Hell’s Angel Motorcycle Club Los Angeles chapter were survivors. A group on a beer run manage to save the President of the United State from looters. The Angels offer their services as bodyguards which the President accepts. Thus with the President using the Hell’s Angels as a Preatorian Guard and some academics form the Fief in the San Joaquim Valley. A rival group forms the Peregrine Fief further west and uses a rival motorcycle gang the Gypsy Jokers as their enforcers.

Two hundred years later both states have endured with an uneasy peace. The motorcycle gangs continue to feud with one another but the rival states live in an uneasy peace. There is a greater threat rising in the east. The Eastern Seaboard Federation is aggressively expanding westward. A scientist working for them has discovered a process to make the dead lands habitable. The Fief sends three Hell’s Angels lead by Long Range and his buddy Milt and another Angel named Belial. Linking up with Indians fighting the Federation they infiltrate the complex in the Ozark Mountains to rescue the scientist.

This book advertises itself as “A Motorcycle Grail Quest Epic and Science Fiction Western.” Wow. Who wouldn’t want to read that. Unfortunately it doesn’t quite live up to its own hype. Wilson does have a tendency to bog down the story with boring exposition. There is also the weird hippie/Native American new age mysticism bullshit that takes up a whole chapter and seems to have no purpose. This was the seventies. An of course the heroes are Hell’s Angels who are not really nice guys. They seem to spend most of their time in drug induced orgies and are fairly casual about raping women. Now the hero Long Range seems like a nice guy. Pretty oversensitive for a Hell’s Angel. Wants something better and prefers to have sex alone with the girl than have the brothers stand around giving advice. Yep a real romantic.

Now of course the Eastern Federation are pretty bad guys. They dress in black with dark visors on their helmets giving them an insect like appearance. And the officers have adopted an English accent for no other reason then to sound evil. Nothing more evil than a English accent. Still the book was somewhat interesting as an example of a post-apocalyptic book from the seventies.

It is a week after the sneak attack by the VC on the Tet holiday. The VC have been totally defeated but there is still plenty of mopping up to do. The VC have broken up into small groups. For them there is no going home and their mission has now become a suicide mission. The Third Field Hospital, The Embassador’s Quarters, The Continental Hotel and the Catholic Cathedral all have to be cleared of hardcore VC. Into the war zone Sgt. Mark Stryker’s sister is assigned to Saigon as an Army nurse. She is soon kidnapped by a desperate VC prisoner and dragged into the Saigon sewers. Now Stryker must race to find his sister while having to race around to all the hotspots.

The final in the Tet trilogy and the last in this series. It is fitting that it ends with the Tet Offensive probably the most famous engagement for the MPs during the Vietnam War. We also get to finally find out about who Stryker really is. His mother died in a drunk driving accident and he and his sister were raised by a Korean stepmother. His father later died from exposure to radiation from nuclear tests while in the army. His only sister an single mother tragically lost her son when he ran out into the street and hit by a school bus. There was a lot of tragedy in his life and nice to finally get some background on his personal story.

My final thoughts on the series. I really enjoyed it and see why it has become a cult classic. I was surprised how much I enjoyed reading this series. It was actually more then just the run of the mill Vietnam action series. I felt like I was also learning what it was like in Saigon during the height of the war. The Tet trilogy was a fitting end to the series. If you like action or historical stories then this is a great series to read. 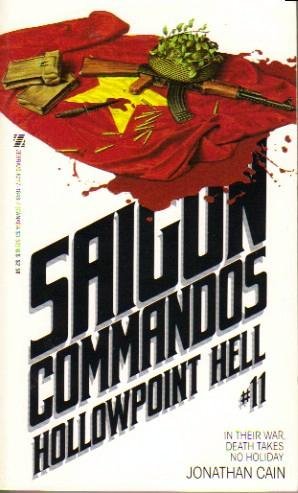 The initial assault by Communist forces during Tet have failed. The US embassy is now firmly in American hands. Still the whole city is an active war zone. Sgt. Stryker and the MPs have no trouble finding VC in the tracer filled streets of Saigon. They still have thousands of hard core VC and NVA to defeat. The Phuto racetrack at the edge of the city has been taken over and made the HQ for the VC. Also they have to relieve the 60 MPs at the Bachelor Officer Quarters-3 who are holding out against 700 NVA regulars from a reinforced battalion. In addition they find time to rescue policeman Jon Toi from being captive by a female gang and must prove the innocence of Sgt. Ron ‘The Brick’ Brickman who is accused of fragging his commanding officer.

The second in the Tet trilogy is a real action packed read. The chapters start at the beginning with actual radio transmissions that took place during the battle. You get a real feel for the confusion of what was going on. Some of the reports are somewhat absurd as one that reported US servicemen were being held captive by the VC and forced to watch propaganda films. In reality it was some off duty special forces watching Cool Hand Luke. Cain captures the excitement and confusion of the battle. He really did a good job of researching it. A very informative book about Saigon during the Tet offensive. 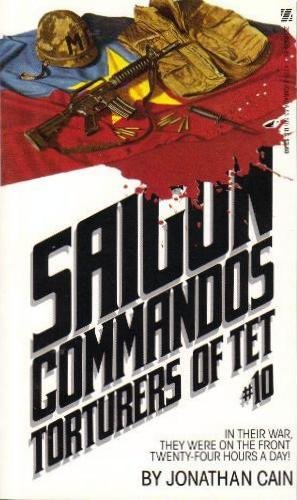 January 31,1968 the year of the Monkey. It is Tet the Vietnamese new year. The most important holiday for the Vietnamese both north and south. There is a truce and South Vietnamese military and police units are at 20%. This it the date that North Vietnam decided to launch a general offensive. They hoped to spark a general uprising among the population and every single city and major military base was assaulted. Sgt. Mark Stryker and the MP’s of the 716th find themselves suddenly fighting off 35 battalions of VC and NVA. His MPs are now fighting as regular infantry and are the only thing standing in the way of a total Communist victory in Saigon.

The book starts with listing the names of the 27 MPs that gave their lives in the Battle of Saigon. The average age was 20. The MPs were the only American forces stationed around the capital and were therefore the ones that bore the brunt of the offensive. South Vietnamese forces were not only at 20% strength but were reluctant to join in because they thought that a coup was taking place and didn’t want to end up on the losing side. Cain gives a detailed and accurate account of the street battles that took place. Including the battle at the US embassy were the MPs and Marines contained the sapper team in the parking lot. Indeed the battle was a total disaster for the VC. They were unable to take a single objective and the population did not rise up as they hoped for.

This is the first of a trilogy in the Tet offensive and I find it an excellent source to get the feel of what it was like in Saigon.