A man stumbling through the woods is chased by wolves when he is rescued by Yama. The man later reveals that he was searching for the Home and needs help from the warriors. He is from around the city of Green Bay which has been taken over by the Technics. The autocratic rulers of Technic city formerly Chicago have set up a base on the abandoned campus of the university. Now people including the man’s wife and daughter are mysteriously disappearing.

Blade is obviously concerned that the Technics are up to some nefarious project and decides to investigate. Taking Yama and Sampson they embark in the SEAL to investigate. On arrival they find hordes of people in a zombie like homicidal rage. The minister of science Quentin Darmobray has been conducting experiments on making people docile slaves. It seems that the people of Chicago do not care for the rigid society of the Technics. Computer simulations show that the Technics will be overthrown in 17.2 years. Hence the mind control experiments.

Of course twenty percent become homicidal zombies but Darmobray is confident the bugs will be worked out. He didn’t thought count on Blade who is determined to put an end to his ghastly experiments.

Its nice to see the author bring back a story with the Technics. They were a great enemy for Blade and this story shows them as worthy foes. Now my dad’s family is from Green Bay. I still have an aunt up there and occasionally visit. Always fun to have a story set in a place you are familiar with. It also amuses me that the Technics would choose Green Bay. The greatest rivalry in football is the Packers-Bears. It seems appropriate that evil Chicagoans would choose Green Bay as the place to conduct their zombie experiments. I don’t know if the author had that symbolism in mind but I do approve of his setting for the story.

After their success with El Diablo the governor decides to reward the Force. They get an all expense paid three days in Los Angeles at the most expensive hotel. Blade is wary about this but relents when the other Force members really want to take up the governor’s generous offer. In reality Blade’s worries are well founded. General Gallagher has a plan to discredit the Force. He hopes that the wild members most being from more primitive factions will tear up the town.

The force minus Blade who decides to stay back to catch up on paperwork check into the swankiest hotel and decide to hit the town. The snooty hotel clerk recommends the China White the hottest nightclub. Well L.A. has retained its lifestyle pretty much as it was before the war. It has also retained it’s less savory elements in two street gangs the Brothers and the Hollywood Barons. The club is owned by the Brothers and while visiting is attacked by the Barons. Raphaela is mistaken for the leader of the Brother’s girlfriend and kidnapped. Now the force is caught in the middle of a gang war.

This is an interesting adventure for the Force. The story is pretty conventional with no weird mutants or world power man dictators. Just your typical drug dealing gangs. Of course the members are colorful. The Brother’s are lead by the suave Mr. Bad and his henchman the Claw. A guy who has of course a prosthetic metal claw. The Baron’s are lead by Mr. Owsley a guy big as a truck and strong as one.

What makes this story interesting is that the Force starts to bond as a unit. Captain Havoc has serious doubts about General Gallagher’s plan. A plan that goes down in flames as newspaper reports praise another Force victory in eliminated the street gangs. It is also notable for the absence of Blade. He doesn’t really show up until the final chapter. This would be the first book were Blade is not the main player in the action.

A man wakes up in a hospital with no memory of who he is or where he’s from. A kindly doctor and nurse inform him that his name is Berwin and he was involved in a construction accident. Now at Kennedy Memorial Hospital in Boston Berwin comes to terms with his amnesia. He has strange dreams of a walled compound and starts to wonder why he is being isolated from the rest of the world.

Berwin is actually Blade who has been kidnapped by an elite Soviet squad and taken to Boston. The Soviets want to find out valuable information on the Home to launch an attack. After they get the information they then want to extract Blade’s sperm to breed genetically perfect super soldiers.

While this goes on his fellow warriors find out that Blade was taken to Boston and a rescue mission is mounted. Hickok, Geronimo and an inexperienced warrior named Marcus take off in the SEAL. They get ambushed by a Soviet patrol in Strawberry Point, Iowa. While managing to defeat the patrol Marcus is killed and the other two are too injured to continue on. Of course Blade doesn’t need any rescuing. Gaining back his memory he leaves a one man path of death and destruction throughout the city.

So the Soviets are back at it. We get another new location to visit. I find it interesting to see how life is like in the Soviet occupied zone. Marcus was an interesting character and I was sorry to see him go. Definitely another fun entry in the Endworld saga. 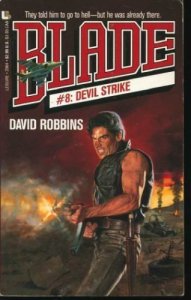 It has been nine months since Blade disbanded the force. While he had some time with his family he was still kept busy fighting the Soviets, naked cultists, salamander men etc. Now the Freedom Force is once again being assembled with an all new batch of recruits. The recruits are an eclectic mix of men, woman and mutant hybrid. Still this group seems to have a lot more potential then the last bunch.

Shortly after the new recruits arrive General Gallagher suggests a training mission. From Baja a vicious raider called El Diablo has been raiding towns on the southern border. Swooping down in armored dune buggies they rape and loot the unsuspecting towns. Gallagher proposes that the Force track down El Diablo’s gang to their camp. Then call in an airstrike to wipe them out.

Blade is reluctant to take out the newly formed force until they have been properly trained but the mission sounds low risk and would provide some valuable field training. Well of course everything goes wrong from the beginning. They are ambushed and one of them is captured. Now the force has no choice but to take on El Diablo and send him and his minions to meet the real Devil.

Finally the force is back. With a whole new bunch. This book does a good job of introducing the new members. The villain while evil is not the typical megalomaniac with world conquest plans. He was an immigrant to California with his wife. Shortly after arriving his wife was raped and killed by a gang of hooligans. Now he has an extreme hatred of all Californians and takes out his revenge. Also we find out that General Gallagher is working to destroy the force. He feels its a waste of resources and wants to ruin Blade’s reputation which is why he suggested this easy mission.

So I will give a role call to the new members.
Doc Madsen from the Calvary. A gambler, gunfighter and drifter. A quick draw with his magnums and a real laid back attitude.
Raphaela from the Moles. A beautiful 21 year old redhead. Inexperienced and somewhat naïve. She joined to escape the Moles for a personal reason not yet disclosed.
Sparrow Hawk from the Flathead Indians. Another excellent warrior and tracker.
Lobo from the Clan. A former gang member from the Twin cities. Is somewhat of a slacker and bullshit artist.
Jaguarundi from the Civilized Zone. Another hybrid from the Doktor’s Genetic Research Division. As his name implies he is a jaguarundi-human hybrid. Has a more agreeable personality and doesn’t have a chip on his shoulder like Grizzly.
Captain Mike Havoc of the California Army. Sgt. Havoc’s younger brother. Another professional soldier. He joined the force to conspire with General Gallagher against Blade. Blames him for his brother’s death but finds himself with a growing admiration for Blades leadership after this mission.

An Interview with David Robbins.

I found an interesting interview with author David Robbins. Since I am reviewing his Endworld series I though it would be interesting to share.

Two border posts in northern Texas are attacked by mysterious people that are naked and have green spots on their skin. The green spots hint at a possible deadly plague. A plague that could eventually spread to the Civilized Zone and to the other Federation factions. It is decided that a small force should enter Dallas and capture an infected person for further study. Naturally the person to lead this is Blade. Since the Force has been disbanded Blade takes along his buddies Hickok and Geronimo. Together with a small band of soldiers they enter the abandoned ruins of Dallas.

First they must survive attacks by giant lizards, giant cockroaches and giant spiders. Texas does everything big and mutants are no exception. They find out that the naked people are part of a cult known as the Chosen. Their deranged leader the Lawgiver has plans to spread his faith. Him and his Chosen have been driven insane by drinking chemically contaminated water they call the Elixir of Life that gives them the green spots. Now he hopes to convert the entire world starting with the Civilized Zone. Tankers are ready to sneak across the border and contaminate reservoirs. Only Blade, his buddies and an alliance with the surviving street gangs can stop their mad plan.

Well its finally here. Blade gets a vacation. We have been hearing about his need for one these past few books and now he finally gets time off. Plato finds in the founders journal a mention of a cabin ten miles to the north. Next to a lake it sounds like the perfect place to relax. So Blade get to take the SEAL and his wife Jenny and son Gabe for two weeks of fishing and lazing around.

Of course post-apocalypse Minnesota isn’t the vacation spot it once was. Initially the cabin is found intact and the lake is teeming with fish. It truly looks as if Blade can finally relax with his family. Unfortunately Blade is wounded in an attack by a sleazy scavenger named Roy who lusts after Blades wife. Later the whole family has to fight off salamander men that live in the lake. Meanwhile empaths at the Home have a vision of Blade in danger and Plato sends out their fastest warrior Sampson to run up to the cabin. Will he make it in time to save Blade and his family?

So Blade takes a vacation. I think the author also took one from writing. The story is interesting but after traveling to all these exotic locations and fearsome foes, a cabin by the lake and salamander men is somewhat of a let down. Blade the warrior that takes on Soviets, mutants, androids and warlords is almost taken down by a sad sack scavenger. Kind of out of character for Blade. And the salamander men are not that much of an enemy.

Still there are some positives to this book. We get introduced to Blade’s wife and son. We get to see Blade as a father and husband which is an interesting side to his character. Also we are introduced to one of the other warriors Sampson. Still it was on whole a mediocre entry in the Blade series. Luckily for the next book the Force is reassembled with all new characters.