The books starts off with members of the Rourke family getting married. Paul Rubenstein marries Annie Rourke and Michael Rourke marries his pregnant girlfriend Madison. The honeymoon is short lived as a suicide squad of KGB Elite commandos raid the Hekla community in Iceland. The raid results in Madison being killed. Michael vowing revenge on Karamatsov goes on a reconnaissance mission into Egypt. There Karamatsov is digging up a large canister of gas he had buried next to the pyramids after the Night of the War. The gas turns men into homicidal maniacs. His plan is the use it on the Soviet Underground city. He wants to take over the Soviet government and become the undisputed ruler. Now the Rourkes have to stop his insane plan.

So there is some unexpected tragedy in Madison being killed. It does give the Michael character a prominent role in this story and he makes a strong friendship with the German Major Otto Hammerschmidt. He also is introduced to a future love interest in archeologist Maria Leuden so he bounces back quick. Annie’s psychic abilities which were hinted at back in #10 are starting to manifest itself. Finally Karamatsov is shown to be total ruthless and power mad in using gas on his own people. The Soviets are now in open civil war because of it. With the Soviets divided this brings in a whole new dynamic to the story. 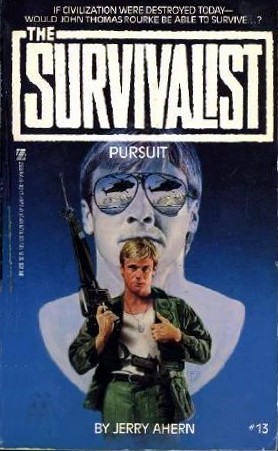 The Nazis have been overthrown but for Rourke and his allies there is no time to rest. For right after that the Soviets launch an attack on the German underground city in Argentina. Rourke does understand the psychology of Karamatsov and knows he will retreat if he feels that his life is personally in danger. So a desperate attack is launched against Karamatsov’s rear HQ and indeed he does decide that discretion is the better part of valor and turns tail and runs. Now Rourke has to go after the Soviet agent that kidnapped Annie. The pursuit take him to Iceland were he finds the island inhabited. The Great Conflagration spared Iceland and the inhabitants live in the volcanos. A peaceful people without weapons they now face invasion by the well armed Soviets.

So they find another civilization and more allies in the fight against Karamatsov. Unfortunately the Icelanders have only swords and won’t be a big help. It is an interesting development and shows that there are other survivors on the Earth. Still with the Germans on their side things are not looking so grim.

Rourke is approached by Colonel Wolfgang Mann who is part of the Nazis forces. Mann has a proposition for Rourke. There is an anti-Nazi movement at the city in Argentina. Mann is part of the movement and needs Rourke’s help in freeing their leader Dieter Bern. Bern is about to be executed and needs a surgeon that can take out the poison capsule implanted in his neck. In exchange the new regime will help protect the Eden project. Now Rourke sees the value of having a powerful ally in his fight with Karamatsov. Also there’s a moral obligation to overthrow the vile Nazis regime. So with Paul, Natalia and Sarah he infiltrates the underground city and rescues Bern causing a general uprising. At this time a Soviet agent Forrest Blackburn kidnaps his daughter Annie and steals a helicopter to go to the Soviet City in the Urals.

Well this was an interesting turn. They are able to overthrow the Nazis and now have a valuable ally. Interesting that so many who have been brainwashed from birth for five centuries would still reject the Nazis. Ahern has a very positive and upbeat outlook on human nature. Don’t know if this would happen in real life but it does make the story quite enjoyable. So now he still has to defeat the Soviets and rescue his daughter.