The final anniversary reblog. I could pass up reblogging this gem. 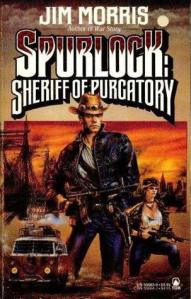 Spurlock is one mellow dude. It could be from his daily routine of nude yoga. Or possibly his meditation and Zen outlook on life. More than likely its that he smokes more weed than Willie Nelson.

Well whatever the reason he seems to be an effective sheriff for Purgatory county Arkansas in this reality of 1996. In this timeline the US has lost a war in the Middle East in 1988 and are now under Soviet occupation. The details of the how are vague but its largely ineffective just troublesome. Except for guerillas operating outside town the residents of Purgatory would hardly notice any change from before the war.

Spurlock’s quiet life is interrupted by the arrival of Senagliero. Senagliaro is the mafia boss from New York who has come to throw his weight around. He is a psychotic who likes to kill people but his shrink says its ok…

Anniversary reblog. The final book in the series. 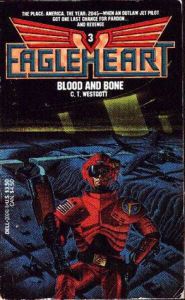 The book opens with Bucko making a clandestine crossing from Detroit into Canada. The northern RIHM horde has come south and set its sights on Detroit. Once the river freezes over they can cross and overwhelm one of America’s major industrial centers for the war. Only Melodie Lane knows where the RIHMs will cross in force but she was shot down and is a prisoner of the RIHMs.

Bucko is the only one who knows Melodie so the government cuts a deal with him. A pardon, reinstatement into FAC as a Lt. Colonel and a sizable monetary reward. Bucko hooks up with the Maple Leaf Underground whose members are mostly strippers from the local club. Together with Chandelier,a the French-Canadian stripper and a teenage delinquent named Doone, he succeeds in rescuing Melodie and foiling the… 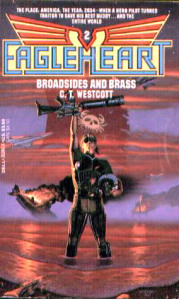 The book opens with Bucko assigned to Boca Grande in Florida. He has it pretty good. Sun, women and a little side money from salvage operations. Bucko gets word that his friend and mentor Black Pugh has been wrongly accused and sentenced to death. He then goes AWOL to bust him out.

At the prison he finds out that none other than his old nemesis from the academy Kyle Befeeter is the provost marshal. Bucko is able to capture Beefeater but fails to save Pugh. Although he does get to drop the loathsome Befeeter into the Atlantic ocean from his Harrier.

Now on the run as a fugitive he manages to make a deal with the government. A pardon if he can successfully infiltrate the notorious Shrimpers. A pirate gang that is terrorizing the Gulf… 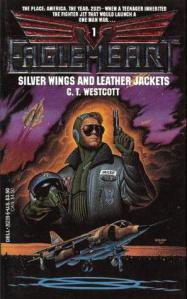 The first book in the trilogy of the fictional autobiography of Colonel William T. Bucko Federal Air Command.

Bucko is a young seventeen year old living at the Twenty-nine Palms airbase in southern California. In this world a mad Russian sub commander launched an attack on the west coast. The resulting radiation gave birth to the RIHMs(Radioactive Induced Human Mutations). Bucko’s father dies when his plane is shot down over Pasadena.

The orphaned Bucko sets off with his girlfriend Melodie Lane to find out his inheritance. He meets up with Black Pugh an old buddy of his father. Pugh has his fathers old TAV-8B Harrier. Bucko will get it if he graduates from the FAC academy in Quantico. On the way back to base Bucko and Melodie are ambushed by the Comancheros an outlaw gang. Bucko gets captured and the evil Donny Smiles(aka the Hook) tortures him and takes his… 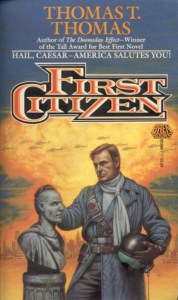 This is the fiction autobiography of James Granville Corbin with alternating chapters told by his sidekick Billy Birdsong.

In this alternate timeline the US decides to do something about the national debt. They repudiate it. Constitutional amendments in the 1990’s repudiate the debt and forbid the federal government from borrowing or raising taxes. A terrorist nuke going off in Washington decapitate the government and allows congress under a powerful speaker of the house to seize power.

Corbin is an attorney from a wealthy family that makes a fortune in the recycling business. When the US decides to annex Mexico after its government collapses, Corbin forms his own division in the Gentlemen Volunteers; the privately formed army the US uses to seize Mexico. His division distinguishes itself and Corbin is elected to congress.

He eventually rises to one of the triumvirate that takes power after the old speaker retires. A dispute…

Logan Adams is a successful adventure novelist. He has come to visit his sister in his native New Zealand when she asks him for a favor. Her husband was involved in an expedition to Antarctica where he was the only survivor. He claims to have seen a city. Everybody thinks he abandoned his teammates and is making up this story.

The husband has convinced an eccentric Englishman named Warden Grampton to finance and expedition. Grampton has a theory that Antarctica was inhabited in the past and hopes to prove it. Logan’s sister wants Logan to accompany the expedition to watch after her husband. Logan has arctic training from his days in the Canadian army and proves to be a beneficial addition to the expedition.

Logan is reluctant but agrees. Soon after he is attacked by thugs on a walk and has his car breaks severed. Grampton’s assistant dies in a…

Anniversary reblog. The final book in the series. 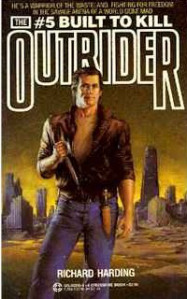 Leather the leader of the Slavestates is in one of his foul moods. He’s lost a lot of supply convoys to the raiders in Chicago. When Leather is in a foul mood he usually kills some of his flunkies. The flunky a tax general that had the misfortune to delivery the bad news thinks fast. He suggests that Chicago should be eliminated.

This gets Leather to thinking of grand dreams of conquest and an eventual alliance is formed with the other two feudal states to wipe out Chicago. Leather kidnaps Lucky the best mechanic in Chicago to build him three fearsome war machines.

Bonner learns of Leather’s plans and rallies the free citizens of Chicago for a final confrontation with the forces of evil. Thanks to Lucky’s betrayal and self-sacrifice the war machines are destroyed and the alliance doomed. Bonner chases Leather and shoots him in the head. It ends…