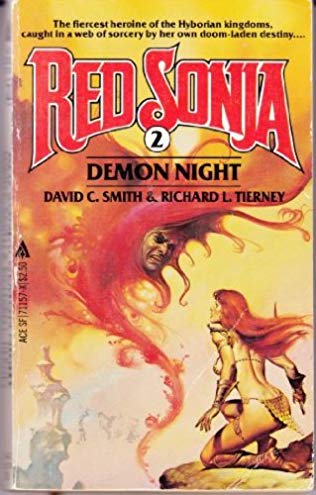 Red Sonja is serving as a mercenary in a garrison at the Zamoran border. One night the captain is murdered and the real murderer accuses Sonja of the crime. So she is forced to flee into the desert. Sonja comes on a small city-state called Elkad. Right away the place gives off a bad vibe what with the corpses of young women hanging from the gate. Seems this city makes regular sacrifices of young maidens to appease the Earth-folk. Soon the newly promoted Captain Kelkum the real murderer arrives with troops. He desires Sonja and has become obsessed with possessing her. Soon Sonja flees into the desert and meets the mysterious sorcerer Saureb. She finds out that Elkad will soon pay for its crimes as the stars are aligning and the Earth-folk will come to destroy the city.

So the second book in the series is another strong entry. Once again a strong supernatural presence with sorcery. Only this time the sorcerer turns out to be a good guy. There is plenty of action as the various factions in the city and the newly arrived Zamorans fight it out. It ends with a big epic destruction of Elkad. Smith and Tierney show that they have an understanding of the character and can write some engaging stories. These are true gems of sword and sorcery.