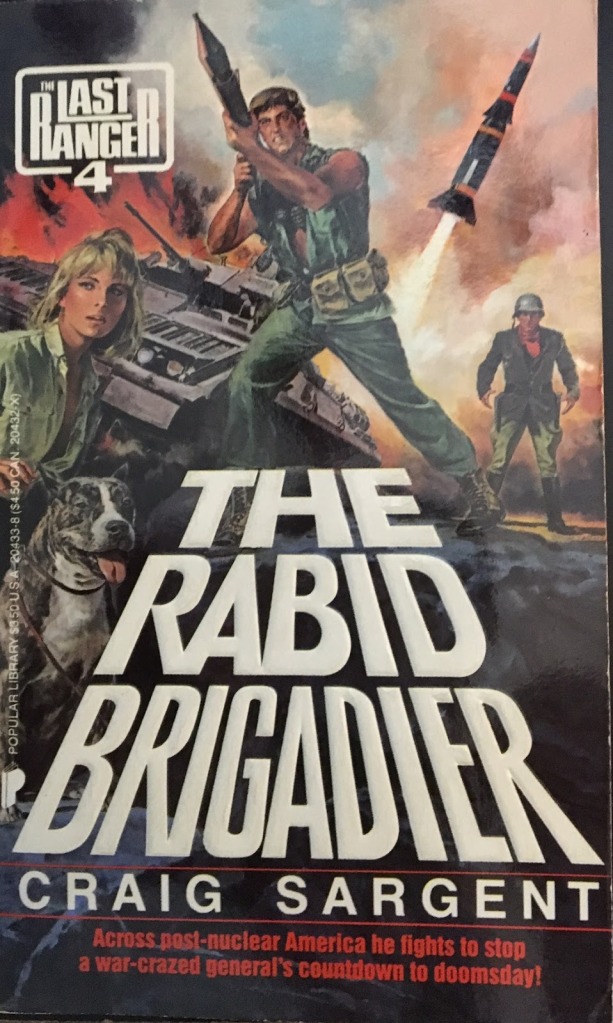 Martin Stone wakes up after passing out after escaping and blowing up the Dwarf’s resort. He finds out the whores that he rescued rolled him and took all his weapons. So he has to fight some scavenger types that come around to loot the bodies. Fortunately Stone was trained by his father and he has no problem taking them out and escaping. He comes to his hidden motorcycle guarded by his pitbull Excalibur. So he takes off to find his friend Dr. Kennedy and his sister April who also escaped from the Dwarf’s resort.

Along the way he gets caught up in a flash flood but fortunately his Harley can turn into a flotation device. Still he is in danger of going over the falls on the Green River when an army helicopter comes along and pulls him out. He is taken to Grand Junction and Ft. Bradley. There he finds an organization called the New American Army under General Patton III. He is organizing to take back America from the mobsters, biker gangs and cannibals that now rule it. At first he feels this organization is offering hope for a shattered country and gladly lets himself be drafted. He proves to be an exceptional recruit over the hicks that they usually get. He also has a romance with the nurse that first treated him the blonde Elizabeth Williamson who is the girl on the cover with the provocatively open blouse.

He gets to meet the man himself General Patton III who he impresses so much that he is given a colonel commission and command of a detail to take out some local cannibals. His mission is a success but is horrified when the men massacre surrendering women and children. He soon finds out that Patton III is actually a man with a goal of imposing a fascist rule that would kill off the undesirables and racially impure. He has a plan to use one of his nuclear missiles to take out a nearby criminal gathering at Glenwood Springs. Stone decides to turn against the madman and warns the scum gathering. He forms a temporary truce with them and leads them on a successful attack of Ft. Bradley. He destroys the missile but Patton III escapes and leaves a message on his murdered girlfriend’s body that he has other missiles and followers.

So the fourth book introduces probably the most colorful villain that Stone has to face. This one at first seems like a force for good. His NAA is restoring law and order. Only the guy is a nut case. If the kooky blood rituals and fist salutes weren’t enough of a tip off then the fact that the guy thinks he’s Patton’s descendant should have done it. The guy is just over the top nuts. He plans to use his ten megaton ICBM and damn the liberal ecology bullshit. Also is oblivious to the fact that his base is in the blast radius.

He also has the obligatory chapter devoted to his sex scene with the local hot chick. A whole chapter to his size and shooting of volcanic lava etc. etc. This is the first time he loses one of his girlfriends but a guy like Stone has no trouble finding others so its an acceptable loss. Also while it isn’t ever mentioned I think Patton has made himself a full General so the Brigadier in the title is not really accurate. I guess the author found it better sounding that Rapid General.