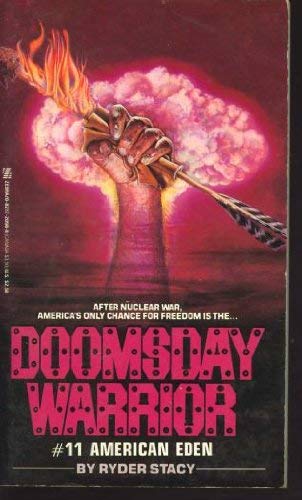 It is New Years Eve and Ted Rockson is celebrating like everyone else in Century City. Things are looking good. The Russians are in disarray and hopes are high they will soon be driven out. His celebration is interrupted by the arrival of a man. Peth Danik was found wandering alone and about to be eaten by a snow leopard when he was saved. He tells a story of coming from a survivalist community named Eden down in Mexico. Before the war a billionaire named Renquist build it to survive the coming nuclear war. He never made it out of Austin in time but his followers survived. It is an underground enclosed ecology with its own artificial sun and salt water lake to simulate the ocean. Only problem is the place can’t grow any food and after 100 years is running out of the canned and packaged food that was stockpiled. Seems these eccentric rich guys are always building the survivalist communities with goofy people. A bit depressing for the future. Anyway Danik was from a faction that wanted to return to the surface. The other faction lead by Stafford staged a coup and took over.

Stafford is a complete nutjob. He has a paranoid fear of the surface and wants to keep the inhabitants imprisoned in Eden forever. His idea for feeding them is to reprocess the centuries worth of human excrement that has accumulated in their dumping ground. But don’t worry for he will use the flies that are scooped up with it for flavoring and nobody will know the difference from real food.

As horrible as feeding shit is to people the real danger is Stafford has a deadly biological germ called Factor Q. He plans to release it on the surface and kill all life. So Rock and his team have to make the trek down to Eden and stop him. They start out with sled dogs and fight the mutant groundhogs and acid snowstorms to a friendly Indian village in Arizona. There they trade the dog teams for Harleys and continue on with the chief.

They make it the Eden and are ambushed by the inhabitants of Death City. This is a cult from some in Eden that was formed to worship the founder Renquist. They capture Rona who they believe to be Renquist’s wife Sandra. They plan to impregnated her with Renquist’s sperm but first have to whip her ass because the chances of bearing a male child increase with pain. Fortunately Rock and company arrive to save her. They must battle the Whisperers who use mental images to drive people insane. Some old robot mines called Scabies(Special Computerized Ambulatory Bombs Intended for Enemy Systems). Finally they reach Eden and battle Stafford and his three henchmen Bros Err, Dedman and Nunchaka-man. A chase on giant mutant bats leads to the destruction of Factor Q and the saving of the human race.

Well the writers really outdid themselves with this book. It looks like they decided to cannibalize book 9. Instead of Canada it is Mexico and they start out with sleds and switch over to a different form of transportation at a friendly native village. Otherwise its the race to save the world from a madman. A madman who wants to feed people shit. I mean literally and not figuratively as most politicians do. Never really explained why this place has such a deadly biological weapon in the first place. Or for that matter why there are all these futuristic weapons like robot mines or lasers that the place has. Scheransky the Russian scientist from book 9 that was sent to help is now apparently a defector and full member of the team. The series would start to be more about these goofy quests to stop some madman like Killov or someone of equal kookiness and less about fighting the occupying Soviets.