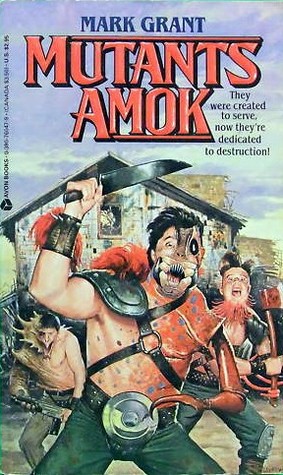 In the late twenty-first century the world is dominated by mutants. It starts with the Great Rebellion of South Africa in 2017. As the black population rises up against the Apartheid government they unleash their secret weapon. Genetically created mutant soldiers kill hundreds of thousands and crush the rebellion. After this a sort of mutant arms race is started by the nations of the world. Since all the countries have banned nuclear weapons the nations now fight their wars with mutants. Soon smarter mutants are created and Braingenerals are formed. These Braingenerals develop a sort of Zen philosophy called The Way. They also rebel against their human masters. Now all humans are locked in slave camps kept alive only because the mutants still need human genetic material to reproduce their kind.

Max Turkel the infamous human leader of the resistance is the only survivor of a raid on an airbase in Kansas. He steals an old Cessna and it crashed next to a farm slave complex in Iowa. Jack Bender finds him and hides him out in his secret treehouse. Now Jack is content with his life and getting ready to marry his girl Jennifer. The mutants though are conducting medical experiments lead by Braingeneral Torx. They have been secretly kidnapping humans for the experiments. Now Jack with Max and his buddy Phil Potts must rescue Jennifer from the mutants insidious experiment.

So I remember seeing this book series years ago and thinking it had potential but for some reason never got it. I recently read some reviews for it and the rare book in this series was finally priced at a reasonable amount so I decided to get it for Christmas. This series is awesome. I can’t believe I missed it back then. It has no pretension to being anything but an over the top action series with gratuitous violence and even more gratuitous sex. Indeed between the action scenes is non-stop sex described in vivid detail. Our old experienced hero Turkel manages to teach the young inexperienced Jack Bender how to have oral sex. And he is a quick learner.

Being the first book in the series it is probably the slowest what with having to have all the exposition. The far future of 2017. So basically the mutants have various classes that are both military and civil servant. The top is ruled by emperors which are giant blobs with cybernetics that control the various countries. North America is ruled by Emperor Charlemagne. Next are the Braingenerals and the main villain is Braingeneral Torx who hates all humans. Then there are various classes. Most mutants seem to be dumb as tree stumps. At the beginning Turkel is fighting a two-headed mutant. Some failed attempt by a third world country to double the intelligence of its soldiers. Turkel shoves his empty AK into its mouth. It reaches up with its hand with a buzz saw attached and manages to chop its own head off.

Turkel seem to be a real happy-go-lucky guy who is just having fun killing mutants. Jack Bender is the good looking stud that every woman wants. Phil Potts the geeky sidekick. At the end they fail to rescue Jennifer in time and Turkel is captured and taken to Cheyenne mountain where Charlemagne is located. So Jack and Phil manage to escape after killing their farm complexes sadistic mutant supervisor Brownie with an automatic seed planter. Since it proved popular last time I will end with an example of some of the glorious sex scenes written about.

He didn’t have to take off his pants, fortunately. He just unbottoned his fly and grouped around in his underwear.
Meantime, Jenny stepped to a table and leaned over it, spreading her legs and smiling at him with an eager urgency.
“Okay, Jack. Okay, I’m ready.”
“Yeah, I am too. Let me just get it out.”
“Goodness, you’d think you had enough practice in the latrines!”
“The sucker’s not swollen to four times its natural size when I uses the latrine.” He laughed, and she joined him. “Besides,” he said, “it’s worth the wait, huh?”
“We’ll see.”
“Oh yeah! You just wait!”

So he does finally get it out after such beautiful dialogue.

Jeez the girl certainly took the romance out of things. But it was enough to soften him enough that he could slip his penis out. He stepped over and rubbed himself against her and he got right back up to snuff. She seemed to inhale him with her pubis and before he knew it he was in instinct land and they were making the famous Great Two-Backed Mutant.

Needless to say it goes on for another two pages. Suffice it to say Jennifer was quite satisfied.

One thought on “MUTANTS AMOK BY MARK GRANT”