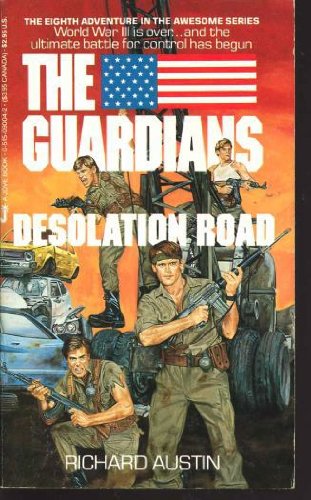 The Federated States of Europe have been invaded. A Turkish general has united the Muslims and launched a jihad against Europe. Naming himself Iskander Bey which is Arabic for Alexander the Great his hordes are pouring in from the Balkans to Spain. This development has presented a golden opportunity to drive the FSE from California. Over ten thousand troops have an iron grip on the state. So the Guardians are sent to California to organize resistance. The plan is to make it so difficult to the Effsees that Chairman Maximov will withdraw them to fight the invaders.

The Guardians then start organizing a guerrilla campaign using the various factions. Some of them were former enemies when they fought former Lt. Governor Van Damm. Eventually the campaign succeeds as the Effsees pull out and start to withdraw. Now some of their former allies turn on them. The eco-terrorists Sons of Hayduke betray the location of where Blueprint personal are hidden including Dr. Morgenstern. Now the Guardians must mount a rescue mission. First they have to fight through FSE supported pirates in a makeshift flotilla. Then ambush an well armed column as it makes its way to San Diego.

So the author was a bit ahead of his time in foreseeing the rise of the Caliphate. The stories set in California are some of the best in the series. The state just seems perfect with its mix of rightwing/leftwing groups along with the other nutjobs. They have to organize the “indiges” indigenous forces into a coherent fighting force. Green Beret Tom Rogers is an expert at this in the various shadow wars fought in the third world. Now its Americans as the indiges and it seems America has been reduced to the third world. There was a lot of action in this book which makes it great.