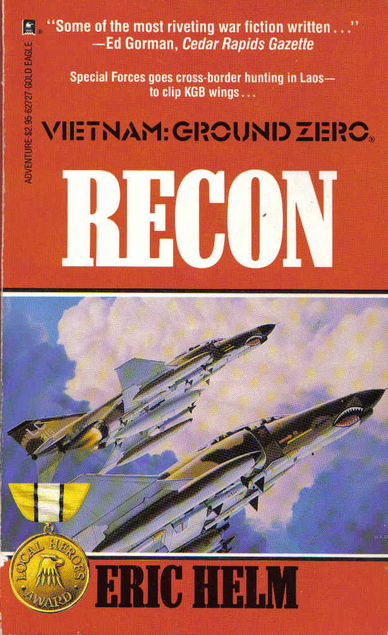 Something big is going on in the Three Rivers Secret Zone in Laos. Several special forces recon missions have been ambushed and disappeared. A rescue mission finds the remains of one group. Besides the normal mutilations that the NVA do to corpses one stands out. A Caucasian man is among the corpses whose head and hands were cut off. A search of one of the Green Berets finds a Soviet paratrooper badge hidden in his mouth. It looks like the team captured a Soviet paratrooper and the NVA made sure the body couldn’t be identified. It looks like the Soviets have an active military presence in Laos and the Americans are very interested in finding out why.

So Captain Gerber and Sgt. Fetterman are put in charge of a team to go in and find out why the Soviets are in Laos. They parachute in and are to meet up with a former French Foreign Legionnaire who has a plantation and works for the CIA. When they arrive they find that their contact has mysteriously been killed and they must rely on his beautiful widow. The widow turns out to be an enemy agent and the team discover the Soviets have established a radar base to track American aircraft.

So this is the final book in the series. As we go into the nineties the interest in the Vietnam war was fading. After thirty-six books they were probably running out of story ideas and it was starting to show. Still this book was a solid effort and I think the series went out on a strong note. This was a very interesting series. While the quality varied as you would expect in such a long series most of the books were good. This was actually a sort of history series masquerading as a men’s adventure series. The war was explored from its early days of 1964 to 1968. It covered both North and South Vietnam as well as Cambodia and Laos. Even an adventure in Hong Kong. It explored the various aspects like counterinsurgency and the politics that went on. The CIA programs, the drug trade and corruption in the South Vietnamese government. How Tet affected the war with the NVA taking over from the decimated VC. You learned little tidbits like ham and lime beans were the worst C-ration. They fought NVA, VC, Pathet Lao, renegade Cambodians, The Red Chinese and even Soviet soldiers. This was definitely one of the best Vietnam War series to come out of the eighties.