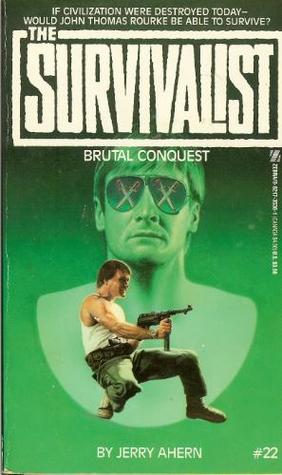 Rourke and his family have managed to capture his son Martin Zimmer the leader of Eden. He hopes to use Martin as leverage to force Dietrich Zimmer to perform lifesaving surgery on his wife in exchange for the return of Martin. They flee into the large rift valley that has formed where the Mississippi once flowed. Now they have to avoid the Land Pirates the lawless groups that travel in large mobile fortresses the size of an aircraft carrier. To distract the Eden forces Michael Rourke impersonates Martin since they look so much alike. It is while impersonating Martin that Michael finds out Eden’s plan to launch a sneak attack on Pearl Harbor to capture the US fleet. On top of this Michael must also deal with the SS head Otto Croenberg who wants to take over the government and tries to assassinate Michael.

So we get some more insight into this new future world that the Rourkes find themselves in. Not a real pleasant place with a new war just on the horizon. There is obvious discontent within the Eden government. Its also interesting that Michael is now in love with Natalia. This was the plan of John’s all along and I thought it was a surprising development. It also introduces Emma Shaw a naval pilot as a potential love interest for John Rourke. It’s hinted at in the book that John and Sarah’s marriage was strained and when he eventually saves his wife they will probably go their separate ways. The story has really changed and grown throughout the decade which makes it fresh.

One thought on “THE SURVIVALIST #22 BRUTAL CONQUEST BY JERRY AHERN”