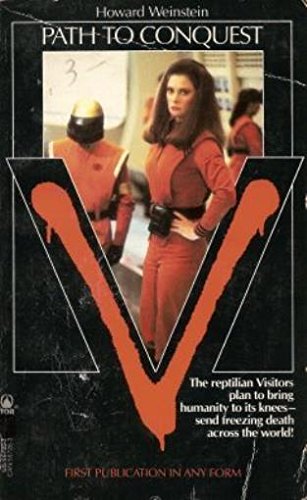 Diana the supreme commander of the invading Visitors has come up with a plan to bring humanity to its knees. Oil is a crucial resource in the human war effort. The free cities in the north require a steady stream to fuel its industry. Diana has come up with a two prong attack. Project Icewind will alter the weather bringing a crushing cold that will eat up fuel reserves. The second is a plan to contaminate the world’s oil with a bacteria that makes it toxic.

Pete Forsythe and Lauren Steward the leaders of the New York resistance embark on a dangerous mission to stop Diana’s plan. From dogfights over the north Atlantic protecting oil tanker convoys to Los Angeles to the Persian Gulf. Our heroes race the clock and must rely on a known traitor to stop the world’s oil supply from being destroyed.

At the end of the Texas Run the next book was announced coming soon. Well the TV series was cancelled and Path to Conquest never materialized so I assumed it was cancelled. In reality Pinnacle went bankrupt and left five completed books in the series in limbo. Two years later I came across this book sitting in the book rack at the local grocery story. Tor books had acquired the rights and decided to release these unpublished books.

Excitedly I snatched up the book. This has got to be the best book ever written for the series. Weinstein brings back the characters from East Coast Crisis in a new adventure. We get a glimpse into the big picture of the Visitor invasion. The government has been relocated to New York. The Middle East has been mostly overrun except for Israel which is able to hold on to its little slice of territory. They have allied with the Arabs and with remnants of Saudi and Egyptian forces hold the eastern Saudi oil fields.

This book had a real epic feel to it. Aircraft carries escort oil convoys from Britain. Air raids on New York. Battles in the Middle East. Weinstein was always my favorite author in this series and his third and final book does not disappoint. I was glad that Tor decided to publish this and not let it fade away.