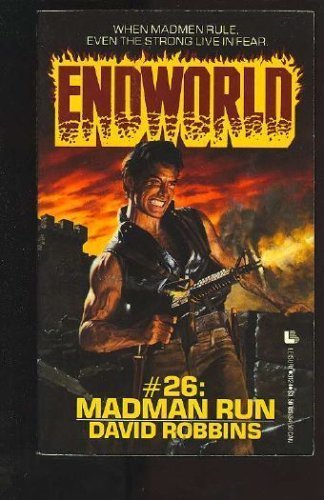 The story takes us back in time to when Blade, Hickok and Geronimo were just teenagers. A young 16 year old Blade and his friends are off on a little adventure. The journals of their founder Kurt Carpenter mention that a recluse millionaire build a castle fifteen miles from the Home. The young boys are on an adventure to explore and find out if the castle still exists.

They do indeed find that the castle is still standing and inhabited. Angus Morlock is the descendent of the millionaire Morey Morlock. He lives with his son a big dumb simpleton named Elphinstone and his wife/daughter Endora.(The Morlocks have a family history of incest that dates back centuries.)They also have to deal with the servants of Morlock called serfs, descendants of survivors enslaved and now are little more than congenital idiots. They also have to deal with Grell a mutant bear that was raised from a cub by the Morlocks. Now the young boys get their baptism of fire as warriors.

This was a change of pace in giving us a story from Blades youth. I suppose that during this time it was in vogue to go back to when characters were young. Muppet babies and Scooby-Doo kids come to mind. Indeed this story is sort of a Scooby-Doo after the apocalypse. You have a spooky old castle with all sorts of traps and secret passages. A ten foot mutant monster with red eyes. And of course the creepy inhabitants lead by an inbred madman.

I thought that it did a good job of capturing Blade and friends as teenagers. We see then as young boys and see how this shapes them to be the warriors that they turned out to be. A nice change of pace from the runs around the country. So we getting to the end of the series. I will be on vacation starting next weekend but will be back with the final two books of this series.

One thought on “ENDWORLD #26: MADMAN RUN BY DAVID ROBBINS”