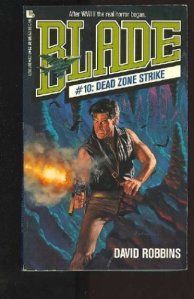 The Cavalry has been having a spate of disappearances lately. They finally get a witness to an abduction. People are being abducted in the night by winged creatures. Kilrane the leader of the Cavalry requests help from the Freedom Force. Blade agrees to the request and the Force is off to South Dakota.

Once there they track the creatures into a dead zone. Those areas hit by a nuclear blast and now completely devoid of life. Except this zone is teeming with mutant bat-men. If not stopped the bat-men could breed into the thousands and the entire Midwest would become their hunting ground.

The tenth book in the series is an ok read. The bat-men are not an intelligent mutant race with the conceit of conquering the world that Blade usually runs into. They are just predators hunting on instinct which make them a much more scary adversary. What I liked about this book is that it takes the Force to one of the other Federation factions instead of around California. The Cavalry is a colorful cowboy culture and we find out some background on Doc Madsen. He gets to avenge his father’s killing at the end of the book. Also some of Raphaela’s sad story of growing up with her aunt is revealed. An interesting book if not the most exciting story in the series.

One thought on “BLADE #10: DEAD ZONE STRIKE BY DAVID ROBBINS”