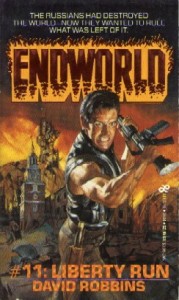 The Home is attacked by a squad of Russian soldiers. Their mission is to kidnap a Family member to gain intelligence on the Home. They try to kidnap Hickok’s wife Sherry but are thwarted by the three mutant members of the Family Lynx, Ferret and Gremlin. The surviving officer of the squad tells of a recent attack on the Soviets by the Vikings. The Vikings like their historical predecessors came up to Philadelphia in wooden Viking ships but armed with modern automatic weapons. They were able to sack half the city before being driven off. A number of the Vikings were captured.

Blade decides that these Vikings could be valuable allies to the Freedom Federation against the Soviets. So he decides to mount a rescue mission which means a road trip to the city of brotherly love. Blade with Bertha and a new warrior named Sundance load up the SEAL and head out. Sundance is another member of the family that fashions himself after the gunfighters of the old west. Armed with his twin .45 Grizzly automatic pistols his is almost as good as Hickok. The three must infiltrate the KGB detention center. Of course nothing ever goes off as planned.

I can see why Hickok is used prominently in this series. He is larger than life character with a plow ahead attitude that you just got to love. Sundance was interesting but he was no Hickok. Still it was a nice change of pace to introduce some new characters in the story and introduce some of the lesser know warriors.

The Vikings were an interesting concept. Blade was too late to save any but did recover the KGB interrogation documents on them. We the reader never find out what they said. Robbins sort of forgot about them and they never did appear in later stories. Now since the series has been revived they might in a future book.