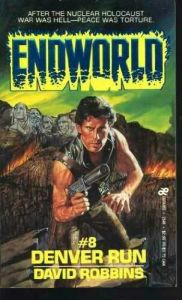 Blade and the Freedom Federation army are on the move. They enter Colorado expecting a fight. What they find are empty cities of Ft. Collins and Loveland. It appears that Samuel has evacuated all the cities north of Denver and has pulled back his army. This strange behavior is later explained as Samuel fears the Freedom Federation was able to steal several more of the small nuclear devices that were successfully used in Cheyenne. Blade hopes to use this to bluff the Civilized Zone into surrender. An arranged meeting with Samuel results in a treacherous ambush that almost claims Blade’s life.

At the same time an army of 2000 was sent by the Doktor before he died to destroy the Home. Now the Home must withstand an assault in their walled compound against overwhelming odds.

And so ends the story arch with the Civilized Zone. Naturally Blade survives the ambush and in a very hilarious way dispatches Samuel. The Home manages to fight off the Doktor’s army. The Civilized Zone has free elections and installs a democratic government. It along with the newly freed Flathead Indians join the Freedom Federation and peace ensues.

Of course that’s not the end of the series. It is stated that the Freedom Federation is interested in exploring the vast areas of the rest of the country. Naturally Blade and the warriors with their SEAL would take the lead. So the series will settle in to adventures of Blade as he explores the unknown lands. He finds out that America after the apocalypse is one goofy ass place.