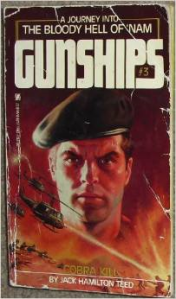 The story starts with a Huey helicopter on a secret courier mission from Laos being intercepted and shot down by three other Hueys. Colonel John Hardin is once again sitting around waiting for an assignment. He is still in the doghouse with the high command. He decides to take a joy ride with his friend Captain Marco in a cobra gunship. While flying along they discover the wreckage and decide to investigate. Suddenly another helicopter comes up and shoots them down. Hardin survives and fights off a patrol of NVA but one gets away with something from the downed Huey.

Now Hardin has to know what was so important for the NVA and why are American helicopters shooting down other copters.The trail leads to a rubber plantation run by a shady Frenchman. Hardin and his ragtag group of misfits now find themselves in the middle of a drug war between the Corsican Brotherhood and the Sicilian Mafia for control of the heroin trade for Southeast Asia.

The third book was one I got for my Christmas break back when I was fifteen. It was a fun experience to read it again on this Christmas break. I thought it was a fun book with the mystery in unraveling the mysterious bag and the helicopter incidents. Now that I have the entire series some of the other incidents make sense and I understand the background of the characters more clearly.

One thought on “GUNSHIPS #3 COBRA KILL BY JACK HAMILTON TEED”