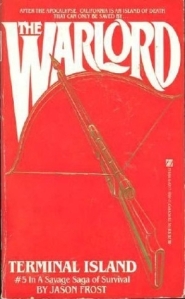 The story finds Eric and his new companion D.B. in the ruins of San Diego. Dirk Fallows is in the area and offering food and supplies for gold. Going into the old San Diego zoo looking for food, both are captured by Dr. Wendy Chen. Chen has been taking care of the surviving animals in the hope of one day releasing them to repopulate the island of California.

Eric finds Fallows and his son who has been effectively brainwashed by Fallows. Also there is a Soviet submarine that has snuck through the naval blockade of the island and set up a base in the area. Masquerading as an American sub they are setting up a nuclear missile that can be launched on the mainland. Fallows has an agreement with the sub commander to pay gold for safe passage for him and Tim under the Long Beach Halo.

Eric must act quick and kidnaps his son. Unfortunately he is too far gone and escapes back to Fallows. A final confrontation ensures were Eric finally kills Fallows but his son goes off vowing to form his own gang. Now Eric must find his son to either deprogram him or kill him.

This is another fun story in the saga. We finally get the confrontation with Fallows and it sets up the continuing story to find his son. Jason Frost is a pen name for Raymond Obstfeld. Raymond is a creative writing professor at a college in California. I found his website and he seems an interesting writer. He still writes mostly mystery and historical books. He has written some Mack Bolan and movie adaptations in the past. He wrote a screenplay for The Warlord that was seriously considered by Arnold Schwartzenegger. Sadly Arnold decided to pursue other projects and a classical cheezy movie was never made.

This is the last Warlord story written by Raymond. I don’t know the reason why but the final book was written by a Rich Rainey. I would have liked the original author to finish the saga. It would have been interesting how he would have handled the ending.

And I have to end with the goofy sex scene passage. “As she came, he felt a hum at the back of her throat travelling along her tongue and into his mouth.”

4 thoughts on “THE WARLORD #5 TERMINAL ISLAND BY JASON FROST”