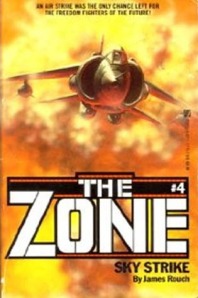 NATO has decided to launch an airborne assault on a major railroad junction inside East Germany. It’s supposed to be an easy in and out with minimum air defenses. Unfortunately the intelligence is completely inaccurate. The Soviets are waiting with crack air defense battalions. Soon the first wave of helicopters is shot out of the sky.

Major Revell and his Special Combat Company are in this first wave. They survive their Blackhawk being shot down and now find themselves hundreds of miles deep in enemy territory. With no hope of rescue they are on their own. They steal an APC and head out. The APC happens to be the personal vehicle for a Soviet general. Now they have the entire Warsaw Pact forces after them.

The fourth book in the series is a great improvement from the last book. I would say it’s actually my favorite. This one had plenty of action from beginning to end. There was no new characters introduced but we had two new losses.
Cline the brownnoser bombardier from last book had his leg blown off by a mine at the end.

We also lost Libby. He was one of the original cast from the first book. I liked this character. His desire to be in the Zone to find his fiancée Helga gave this series a very sympathetic character to root for. The horrors of the Zone were finally getting to him. He knew that they would commit him to a psychiatric ward and take him out of the Zone. He couldn’t bear to give up his search so deserts at the end to continue his futile search in the Zone.